Building on the success of their earlier Panzer IV releases, Hasegawa is continuing to release additional vehicles based on the ubiquitous Panzer IV chassis. In fact, their next releases will be two versions of the Jagdpanzer IV. The basis for the Panzer IV kits was the original Munitionspanzer IV, which was included in their Karl Morser kit. It was a very old kit, and the parts do not really stack up all that well compared to new kits. In the Panzer IV series, Hasegawa included the entire lower hull, chassis and track components from the Munitionspanzer, while making the rest of the kit parts from new molds. Refer to my Panzer IV Comparison article for more information about the Pz. IV kits.

The two main complaints about the earlier Panzer IV's were the poor wheels and tracks. For these new releases, Hasegawa has fixed the wheel problem by including sprues of entirely new wheels (and other details); unfortunately, the same poor tracks are still included with these new kits. We can only hope that the upcoming Jagdpanzers will finally have hard plastic, link-and-length tracks included, but I wouldn't count on it.

The Ostwind and Wirblewind kits are primarily composed of the same hull components from the Panzer IV series (including the lower hull from the Munitionspanzer), but with the addition of the new wheel sprues, and two small unique sprues for their appropriate turret parts.

Here are the upper hull sprues carried over from the Panzer IV kits: 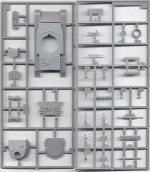 Here are the new wheel sprues:

Here is the new sprue of parts for the Ostwind turret:

Here is the new sprue of parts for the Wirblewind turret:

As a comparison with the ESCI Wirblewind kit, this new kit compares very favorably. The overall hull is nicer on the Hasegawa kit, as are the wheels. But of course the ESCI hard plastic tracks are much better. The turrets rate about the same in quality, although the Hasegawa turret sides are molded a bit thinner. The guns on both kits are mediocre. The barrels for the 20mm cannons are too thick (as always). This Hasegawa kit has the ammunition clips molded onto the gun breaches, whereas they are separate parts, and better detailed, in the ESCI kit. ARMO produces a 20mm Flakveirling in resin (with turned aluminum barrels), which could be used to directly replace the guns in these Wirblewind kits.

As mentioned above, the tracks are the same, single piece vinyl, horrible tracks included in their Pz. IV kits. I highly recommend that builders replace the tracks with some from a Revell Pz IV kit (if you can spare them), or use the photoethed brass tracks from ExtraTech or PART.

The decals are typical of Hasegawa, i.e., well printed, good color and registration, but the carrier film is too thick. As you can see, the markings are limited to a poor selection of numbers and a couple of balkenkreuzes. Perhaps most Flakpanzers didn't carry many markings. If it wasn't for the overly-thick carrier film, these would be pretty nice decals.